Make Me a Kinder Man


If It All Goes Well


Take Me Down Low

As on the original website, I have made all the songs from The Gousters 2005 ( above ) available for free downloading !

Anyone who would like to order the physical CD can order it here:

This is the press release from the first CD: The Gousters 2005 in top 50 for 60 weeks on Roots Music Report in the Folk category.. 5 Star Review by Brenda Barbee
Walt Cronin met Zander Schloss when working on a now cult film called "Repo Man" by Alex Cox. Walt's friend Peter McCarthy from Chicago was one of its producers. He had just moved to Los Angeles and helped out videotaping the auditions with his interest in video production just beginning. Zander of course played "Kevin" and went on to pursue his true passion of music, writing some of the soundtracks of Alex's other films, "Sid & Nancy,"& "Straight To Hell" as well as acting in them. He is the bass player for one of L.A.'s founding punk bands "The Circle Jerks" still on tour after these many years.

Zander has also written with the late Joe Strummer and Scott Weiland. Zander, originally from St Louis moved to California as a teenager. Having become friends while working on "Repo Man" in 1984, they reunited when Zander rented the studio apartment in 1999 over Walt's garage. This was a home he and his wife were renting in Los Angeles. This old Spanish home built in the 1920s had what is very uncommon in L.A. "A basement".

This is where they spent countless hours recording analog tracks onto an eight track reel to reel. Zander's command of musical instrumentation and the help of his many friends who contributed both instrumental and vocal tracks over a period of 3 years evolved when they brought the reels to Brian Susko's Westside Recorder Studio. It was there, that editing, mixing and dozens of more tracks were added digitally over the next few years with Brian's fine ear.

Walt moved to Crestline, CA in the San Bernardino Mountains where he and his wife had bought a cabin on an acre of land. Walt was seeking some peace of mind having been diagnosed with post-traumatic stress. He had served as a Navy Corpsman ( medic) with a Marine platoon in Vietnam in 1970.

After the wildfires in the fall of 2003, Walt was never able to regain a sense of safety living somewhat remote in the forest and returned to urban L.A. He finally has completed what had been sitting on those back burners these many years.. The Gousters. The origin of the name is what is perceived as pre-dating the "Grunge" look in Seattle.
It was a term he referred to he and his friends as of the similar style or "non-style"of the way they dressed growing up in Chicago in the mid-1960s based on black street slang on the south and west side. 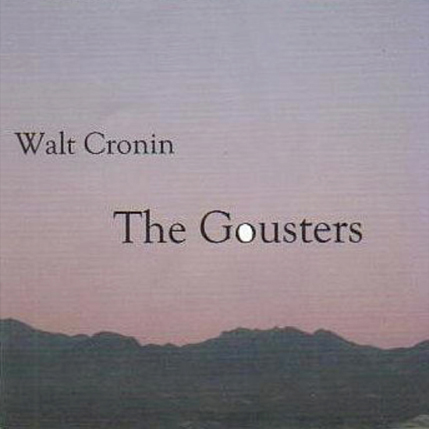 Walt Cronin collaborated with his former, fellow songwriter, on their debut CD "The Gousters" in 2005. It remained in the top 50 alternative country category on Roots Music Report for 60 weeks. Walt is a former navy corpsman (medic) that served with a marine platoon in Vietnam in 1970. His songs are memoirs of the heartache of war and it's aftermath with a beautiful love ballad thrown into the mix. Staying true to the folk history of societal woes with some bright new tunes finish off this eclectic blend of strong lyrical content and melodies.
Since the release of their debut album "The Gousters" in 2005, Walt Cronin has continued to compose, on his own. This CD written and sung by Cronin has many of the elements of the first CD. " It is definitely in the folk-Americana tradition," says Marty Beal, the producer and arranger of Walt's CD from the Racketroom in Santa Ana, CA where all the recordings took place.
Marty wore many hats in this musical composition playing most of the instruments all the while, enhancing Walt's creative style with musical expertise. Walt, the singer / songwriter on this, his self-titled CD has brought to light his own heartfelt melodies which are the result of many influences from sixties musings with a contemporary folk rock feel.

All can listen to this album & radio stations may download free from either link:
http://airplaydirect.com/music/waltcronin/
Link for Radio Stations to Download Free: http://www.radiosubmit.com/rs/bands/361/ 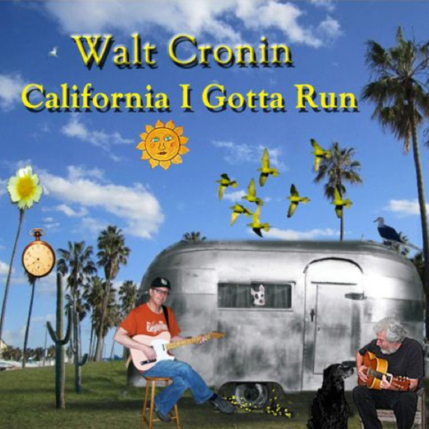 Walt Cronin's release of California I Gotta Run, his third album, follows 2005's The Gousters and 2008's somewhat redundantly titled "Walt Cronin The Gousters." As with the previous records, California I Gotta Run features a spectrum of Americana/folk influences: Walt proudly emulates the tradition of his heroes such as Pete Seeger, Bob Dylan, The Byrds, John Prine, Emmy Lou Harris, Steve Earle and Robert Earl Keen. As an artist, Walt came into his own at the tender age of 50. A lifetime of experiences (including a stint as a medic during the Vietnam War and a subsequent semi-nomadic life) provide ample inspiration for subject matter in the numerous songs in his repertoire.

Walt spent over a year writing and crafting songs for California I Gotta Run before bringing them to his producer, Martin Beal of The Racket Room in Santa Ana, CA. Walt and Martin spent several months on and off in the studio fine tuning and enhancing the 13 songs. Walt's goal was to reflect the sincerity of folk music history while placing the songs in a contemporary setting. The collaborators achieved their aims with Martin providing detailed arrangements and a fine editing ear while playing a myriad of instruments (guitars, keyboards, bass, mandolin, melodica, bouzouki, hurdy-gurdy, percussion, as well as performing all drum programming).

The songs on the new album deal with a range of very personal, introspective issues, some dark and troubled (relationships tainted by substance abuse), some benevolent and almost fatherly (respectful, heartfelt advice to today's returning war veterans from someone who has been there), some whimsical (a 1950s-flavored teenage love story). Overall, the album is largely formed by the hope Walt has found by facing the persistent demons from his wartime experience."Awake In A Dream" is an ethereal voyage of the mind and heart. Walt's long time love for his wife shows in other beautiful songs such as "Together We'll Be," and "Shining Through." "Angel Wings" is inspired by his Grandfather's philosophy of life. "A Boy Of Purest Wonder" is the story of a young man reaching for his dreams in a time long past. "California I Gotta Run" is about fulfilling a dream of rural simplicity. All the songs, whether whimsical, heartfelt or laced with grim regret, are woven with the care of Walt's quality story-telling and songwriting and are beautifully arranged and produced with friend Martin Beal. We think listeners will be entranced listening to Walt’s stories on California I Gotta Run.

The new veterans compilation CD "Until You Come Home" is officially out! I'm really excited about this CD getting out and hoping it will bring comfort to the many soldiers and family members affected by war ~ George Mann
Please click the link below, for more information and credits.
Released by fellow folk singer-songwriter and activist George Mann with my song "No Shame In Cryin' "